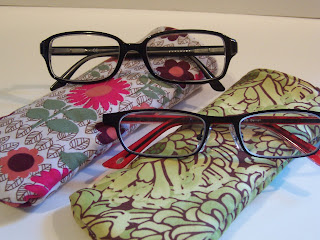 Look what I had to buy -- a second pair of lenses! I've been wearing glasses for years now just for driving and seeing clearly at a distance. However, the closeup vision has been failing for a couple of years. I fear that it is age-related and from working on the computer all day. Last Saturday, I was at Target in the early morning putting off beginning housework. I was trying to choose a facial mask for my daughter, but you know how the print is so opaque on the back of the bottles? It was just a blur. This very nice, much older than me, woman was nearby, so I handed the bottle to her and asked if she could read it. Yep. She rattled off the instructions and use of the product to me. I headed over an aisle or two and bought the 1+ power, sit-on-the-end-of-your-nose specs shown in the foreground above. As soon as I put them on and looked at the product instructions, ALL WAS CLEAR. Drats! I wanted it to be the opaque print!
My kids picked out the Ray-Bans last year - the black pair in the back. I really do like those, so librarian-ish but cool. I couldn't afford Raybans when they were popular and I was in college. Now I can, but I have to buy them not to be cool but to actually SEE. Anyway, I usually throw my glasses in my large totebags and then have to fish around for them. Now I have three pair, including my snazzy, large, tortise shell with rhinestones sunglasses, so I decided to corral them if possible, thus, the glasses holders. Nothing new, just trying to make myself feel better.
Guess what? The Valentine Heart Tie sold! (I do have one more ready to ship.) It is going to England! Anyway, I'm glad so many liked the tie and commented to me about it. My son wore the striped one in his university colors today. He sent me a photo by phone. It looked so sharp with his black zip-up Land's End sweater. I haven't been able to sew for him since he was a toddler and made jumpers and shorts, so this is great! 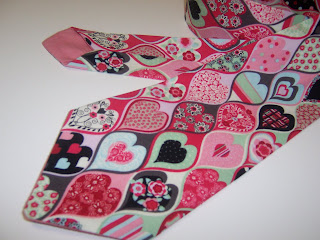 I show this tie again to remind you of the fabric. I bought it at Hobby Lobby for those of you who would like to know. I love it, but what do I do with two yards of it? Any ideas? Other than maybe an apron or girl's pinafore or more ties, what would you do with it?
Who wants a fat quarter of this fabric? Leave a comment with your suggestion of its use, and I'll choose a name Friday and contact you to mail it out on Saturday. Be sure I can reply to your comment or I'll just pick the next person in line.
Posted by calicodaisy at 9:15 PM

You could make yourself a new glasses case to hold one of the pairs not in use and then send the rest to ME! Make a pillow case....use some in blocks for a quilt...make a bandana for the dog.
Lots of different things that could be done with two yards!

I am so sorry about needing the glasses. I have bad eyes and wear contacts, but am dreading the day when I need reading glasses also. I know it is coming though.

Great news about the tie. It is adorable! I think you should make a banner out of the rest of the fabric. It would be so cute and a fun Valentine's Day craft to brighten up your home.

Have a great night!

My eyes have been horrible since I was in the 8th grade, so I hear you about the glasses. I had a friend in college who wanted to wear them so badly but had wonderful eyesight, so she just bought herself a pair and put non-prescription lenses in them. Now she's an optometrist. Crazy, huh?

About the fabric, how about fabric bowls? Or lunch totes, or napkins or placemats? Hmmm. I think I might be hungry, everything is food related...

Wow you should make more ties if they sell that quickly, I showed my hubby and he said he would wear it, Him and the guys at work have this thing about ties, they like to see who wears the brightest most outrages ones.
Joanne xx

Reading glasses have entered my life daily now too (sigh). It looks like you need to make a few more ties to sell. A fat quarter would be just the right size to make a candle mat for a Valentine candle display on your table.

your glasses story cracked me up! i'm having to hold things further and further away from my eyes when i read fine print.

yippee your tie sold! it's so pretty i'm not surprised someone grabbed it up fast.

yeah i want that fat quarter! i think you should make another tie for sure, maybe trim some dishtowels out of some, make a tea cozy or coffee cozies, make an apron (my new obsession)...so many ideas, so little time.

We all have the vision problem eventually. It comes with growing mature I suppose.

I'd make a dress for a doll with that pretty fabric. I've been making cloth dolls for my kids, neices and nephews lately, and the dolls get reversible dresses.

Maybe even a bib and burpcloth set for a sweetheart of a baby.

Love the tie! I never would have thought of that!

i think i have about 15 pairs of reading glasses...it kills me how they all seem to end up in the same place and never where i need them.

That's so cute your son is wearing your work! I knew the tie would sell!

My suggestion isn't limited to one, hope that is okay. I see another tie, a potholder, a pincushion, the centers of a cathedral window quilt, yo-yo's, addition to stash for a future quilt or maybe pieces to a valentine table runner.
Have a great day.
Donnelly
(bananabradysmom@yahoo.com)

I love the tie! I can relate to the eye situation - I have to get a new pair this month!

More ties for sure. Also how about coasters?

As someone who just turned (ahem) 40, I can give a shout out to those Target reading glasses. Dollar Tree sells them, too. I need to post a picture of my red pair...

I would make a fun zippered pouch, or a potholder, or a fabric covered headband, or maybe a pair of boxers for my hubby! :)